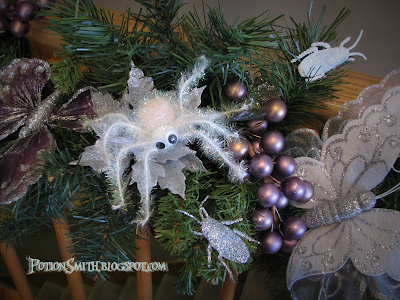 I love how these glittering cockroaches fit in with my existing décor.  It's funny when people first see my Christmas decorations they say, "That's pretty." and then they notice the spiders and ask, "Why?" Like butterflies in December isn't crazy?  It's always the spiders that throw them.  Can't wait to see how cockroaches go over.

I totally stole this idea, so to give credit where credit is due and if you'd rather buy, than make your own, checkout CreepyCrawlyXMas  on Etsy.  Also the ones are I made are a work in progress and I haven't ironed out all the kinks.

It was this lovely golden cockroach that caught my eye and then I remembered I have fifty thousand plastic roaches.  Well not quite that many, but close.  I stocked up last year after I decided I didn't have nearly enough to properly decorate my bathroom. Another idea I stole, this time from HalloweenForum.com. 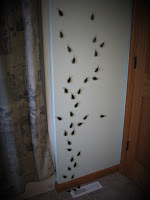 Look at this sad smattering of roaches.  And then, because that's the way things go, I didn't have time to put up roaches for Halloween.  If only I had time to make a 100 tiny Santa hats I could put them up now as Christmas Cockroaches.

...and then on Christmas Eve while sugarplums are dancing around in people's head, an intrusion* of Santa's Little Helpers scurry in from every crack and crevice, carrying presents for all the good little boys and girls...

Of course if you turn on the lights they all scatter and the presents poof away into fairy vapor.  And if your naughty, well we know what happens to the naughty ones.

*that's what a group of cockroaches is called, I looked it up and everything, thank you google.

But I digress and what I really wanted to tell you about was my experience with making plastic bugs Creepmas worthy.  The snakes are hard plastic, everything else is a rubbery, but not squishy or stretchy plastic. About half are glow-in-the-dark.  The rest were different colored. I planned on starting with white paint, but I have this black spray paint that's paint & primer and specifically says it bonds to plastic.  I thought it would be good to use that as a base coat and then paint over.  That was a mistake, it never dried and was really sticky.  Afterwards I remembered having this problem before with plastic, but I think that was with regular spray paint. The moral of the story is sometimes when they say test a small area first, you should actually test a small area first. 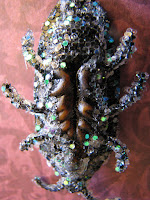 I took a roach and the centipede and sprinkle them with glitter which stuck to the sticky paint. I had spray painted and glittered both sides.  Both have an alligator clip glued underneath, the centipede is fine but as soon as I applied pressure on the roach's clip it pealed off with the paint. It looked really gross.

The other spray painted ones I covered with a coat or two of white acrylic paint.  The I mod podged them and sprinkled on glitter.  The glow in the dark ones I coated with glitter mod podge.  Then I added glitter to small areas because I didn't want to cover up too much and not have them glow.

To hang I either hot glued a loop of clear plastic line, or an alligator clip, we'll see how long that lasts too. With the loops I did the mod podge and glitter after attaching the loop.  Gave it a cleaner look and maybe it'll help hold it on? I like the roaches on clips. I can see where they could easily be turned into a festive brooch or using a hair clip, a merry hair accessory.

Overall they turned out well, I just don't know how long they'll last. 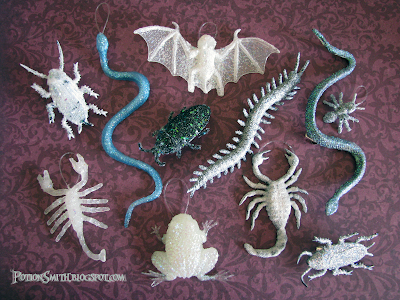 I loved the roach clips so much I had to make more. In my mind I envision a stop motion synchronized Snowflake Dance of the Roaches.  A pulsing kaleidoscope of ever changing scurrying snowflake patterns. 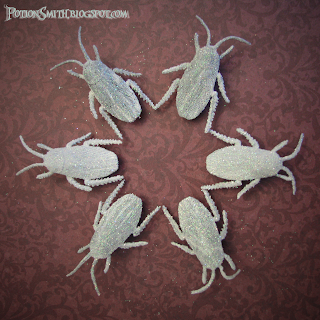 These I had to paint white because the iridescent glitter lets the color show through.  Two of them got two coats of white.  I'm torn between the beauty of the whiter ones and the details that show through on the ones with only one coat.  All of them were coated in mod podge, a thin coat applied with a small brush is best and then sprinkled with glitter. After they dried I brushed on a clear acrylic coat. 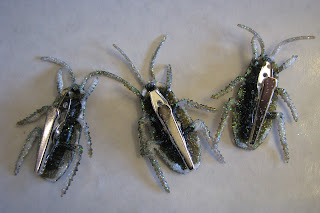 Underneath I only did the antenna, legs and just the edges of  the body. 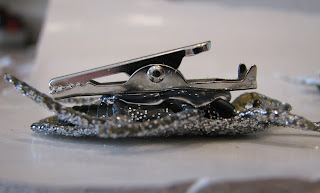 After they were all clipped on here and there, they started falling off the clips.  Nothing quite like glittered cockroaches raining down from above.  The hot glue was staying on the clips but not the roach bodies.  I reglued them using a generous amount of hot glue and that has held so far.  My next option would be E6000. 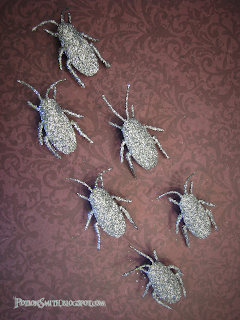 These are sliver glitter, they almost look like sparkly chrome. 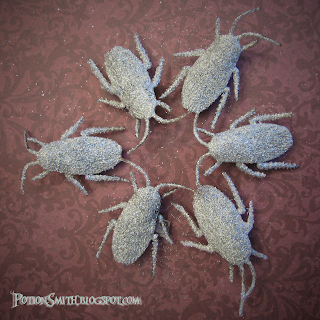 And these are covered in an opaque white glitter.
I guess now I have to start working on all those tiny Santa hats.
Posted by Donut at 6:57 PM 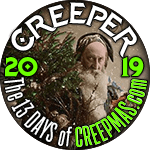 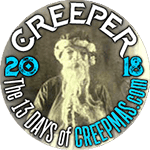 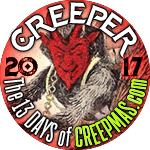 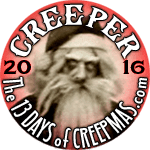 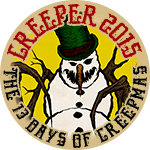 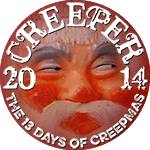 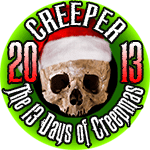